I felt I could breathe here, in America. I was born in Pakistan, but US citizenship freed me from the burdens of religious tests, dictatorship and the absence of human rights. As I went about my work, I never felt that I was a woman, a person of color, a Muslim or an immigrant.

But more than a quarter-century after becoming an American citizen, I admit I feel a little vulnerable. There is a racial consciousness around me that I did not feel before. I feel Muslim. A woman. Of color. An immigrant. And my female friends are worried their right to choose what they do with their body will be taken away.

America has always been an optimistic country, a place that seemed to feel assured of its greatness. That so many people in this country embraced pessimism, and that the country needs a political novice to reinvent America’s greatness, is disturbing. The hatred and bigotry unleashed in the course of this campaign will not easily be pushed back into the Pandora’s box of stoked resentments. 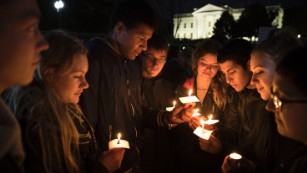 I became a US citizen at a time when the country of my birth was suffering under a dictatorship. Gen. Zia-ul-Haq, a US ally, was “Islamizing” Pakistan by force, denying human rights to the country’s citizens. Sharia-based Hudood laws enshrined misogyny, while previously afforded rights and safeties for women were curtailed.

While a student at Wellesley, my Pakistani passport expired and I learned that applications for a new passport required a religious affirmation. Muslim citizens of Pakistan could get a passport only after signing a declaration that we disavowed members of the Ahmadiyya sect as non-Muslims. To me, signing such a declaration felt like being complicit in the marginalization of Ahmadis.

I decided I couldn’t. But fast forward to today, and too many minorities feel they now are being singled out and marginalized.

While working in television news, I traveled the length and breadth of this great country. I covered political party conventions, presidential debates and inaugurations, and even the controversial Florida recount of 2000. I have voted for Republican candidates and Democrats. In America, my sole identity was American.

If Donald Trump is going to make America great again, he will need to be genuinely inclusive of all Americans- Farahnaz Ispahani

More recently, as I campaigned for the Clinton-Kaine ticket, connecting with voters throughout the country, I met Muslim immigrants, Hispanic and black Americans — upstanding citizens, some with family members in the military — who said they feel scared. They feel “otherized.” They wonder what their neighbors think of them.

After it became clear that Donald Trump had been elected, CNN commentator and activist Van Jones spoke of “a nightmare,” describing the fears of Muslims and of families of immigrants. He described the results as, in part, “a whitelash against a changing country and a whitelash against a black president.”

As an optimist, I can only hope the rhetoric we heard will gradually subside now that the campaign is over. But, if Trump is going to make America great again, he will need to be genuinely inclusive of all Americans, especially those who did not vote for him and who do not agree with his vision.

More fundamentally, we need to start a discussion on American values in a changing world. Blacks, Muslims and others were not necessarily part of the original “idea” of America. But we are here, and we contribute to America’s greatness.

The reality is that America needs reconciliation and healing, something that both major political parties must contribute toward. Unfortunately, a Democratic Party that veers further to the left will only aggravate the people who elected Trump. The party might consolidate its base, and even win some elections, but it will not bring out the best in this great country. The Republican Party that I voted for in the past, meanwhile, is now unrecognizable. Until it stops being the party of angry white men, there won’t be room for people like me.

Holding on to outdated ideas about American values — and insisting on seeing American greatness through the prism of white men who resemble our Founding Fathers — will only lead to the disintegration of the fabric of our nation. Similarly, a vision of a social-democratic paradise backed primarily by minorities, also won’t work.

I became an American because of the good — and inclusiveness — of this country. I can only hope that America can move past this divisive campaign and ensure that future Americans feel they are exactly that — Americans, and not outsiders.

Farahnaz Ispahani is a Global Fellow at the Woodrow Wilson International Center for Scholars and the author of “Purifying The Land of the Pure: A history of Pakistan’s Religious Minorities,” Pakistan Parliament 2008-12, Adviser to President of Pakistan 2008-12 and Foreign Policy Global Thinker.