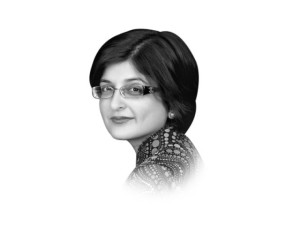 In the aftermath of 9/11, Pakistan was forced to revise, on short notice, policies that had been pursued for the preceding three decades. The terrorist attacks in New York and Washington, and America’s response to these attacks, presented the country with few alternatives. But the change of direction was sudden and without adequate national debate. An individual who had assumed power in a coup d’état felt compelled to adapt to international pressures, events and a changing regional scenario. His survival, rather than a broader view of changed national interest, dictated the policy changes that were introduced piecemeal in 2001.

There is no question that Pakistan needs a new direction to realise the vision of its founding fathers. We have to bounce back from the brink.Terrorism lives among us. It is the biggest challenge for the people of Pakistan and the international community. The country must also tackle rising global oil prices, high inflation, energy shortages, unemployment, low foreign investment and political instability.

What, then, should be the course of action for those seeking a secure, democratic, modern and progressive Pakistan, with respect for the rights of the people and a stable environment for all citizens to progress and develop?

First and foremost, we must renegotiate our understanding of recent history and national identity. Do we want to be a country associated with extremism and militancy? A country that is considered a safe haven for terrorists from around the world? One where extremists kill and maim citizens and soldiers with impunity? Do we want to be on the right side of history?

The correct answer to all these questions involves our continuingalong the democratic path. If consent of the governed is the most fundamental concept of democracy, its most essential right is that of citizens to choose their leaders in free, fair and regular elections. Freedom of press is obviously vital for the nourishment of democracy. It is important that the voice of the people, with all its diversity, is not suppressed. At the same time, if the media fails to protect the democratic ideal, then it is not playing its role in a free society. A truly independent judiciary is another vital requisite for ensuring democratic culture.

Democracy needs great patience. It may be tempting to dislodge a government prematurely or demand midterm elections but true democracy lies in governmental stability between scheduled national elections. Only if democracy is given the time to mature will Pakistan have a chance to join the rank of nations where the majority prefers sensible policy over immediate patronage.

Since 2008, Pakistan has been in the process of rebuilding a democratic tradition. President Zardari relinquished the sweeping presidential powers he inherited from Pervez Musharraf by signing the 18th Amendment which returned Pakistan to a parliamentary democracy more in line with its 1973 Constitution. The political reconciliation process initiated by Shaheed Mohtarma Benazir Bhutto and carried forward by the government has the potential to restore people’s confidence in the democratic forces. But the political class has to change its culture of endless bickering and constant one-upmanship.

Pakistan has taken the challenge of defeating the Pakistani Taliban seriously. Pakistan’s army and Frontier Corps are taking up the fight and have the citizenry with them.While limited resources are available, the country has made enormous investments in its internal security apparatus. This menace is not going to go anywhere soon. We must have the backbone to confront it — and, over a longer period of time, to defeat it.

The country’s challenges are daunting but there is no alternative to staying the course. We can allow our difficulties to lead us down the road of restiveness, as has been the case in the past. The result would be an illusion of change, possibly with a saviour or strongman emerging only to leave the nation’s fundamental direction unresolved. The only way forward towards a liberal, progressive Pakistan is through patience and faith in democracy.