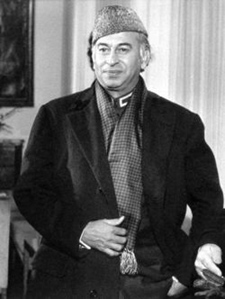 Ye bazi tum he haro gay, (This challenge you are bound to lose)

Har ghar se Bhutto niklay ga, (A Bhutto will be born in every home)

The constant struggle of the Pakistan Peoples Party and its consistent sacrifices have proved that the seeds of the social democratic ideology sown by Shaheed Bhutto cannot be easily eliminated. Today, Pakistanis view dictators as evil, while the spirit of Shaheed Bhutto lives on through the 1973 Constitution drafted by the PPP.The fourth of April will always be remembered as a black day in the history of Pakistan. On that day, in 1979, a dictator tried to extinguish the flame of democracy, demolish rule of law, silence the voice of the poor and the dispossessed, and desecrated the Constitution of Pakistan. It is the day when Pakistan’s first popularly elected prime minister, Shaheed Zulfikar Ali Bhutto, was sent to the gallows after a show trial, with the help of a compliant judiciary — the most glaring judicial murder in recent history.

History conferred the honour of restoring the Constitution on the PPP just as the framing of that Constitution through unanimous consent of all provinces had been the PPP’s achievement. Under President Zardari’s leadership, the PPP helped peacefully remove another dictator, General Musharraf, and created broad political consensus to revert the 1973 Constitution to its original form.

Zulfikar Ali Bhutto’s stature among leaders of the Third World is matchless. Shaheed Bhutto was prominent for his efforts against colonialism, imperialism and for national integration. He brought Pakistanis together and rebuilt our national identity after the calamity of the separation of Pakistan’s erstwhile eastern wing.

Shaheed Bhutto was undoubtedly the most charismatic political leader that Pakistan has ever seen. And the political party that he founded remains a popular democratic force to be reckoned with even today. Bhutto emerged as a powerful spokesman for the world’s Muslims. His leadership in strengthening cooperation among Islamic countries through the 1974 Lahore Islamic summit is now legendary.

Bhutto’s era can safely be described as the Age of Revolution. He mobilised the country’s first mass-based political party, which became the platform for the voice of people from across the country. The slogan of “Food, Shelter and Clothing” shifted the focus of Pakistani politics from theological to economic issues. Political discourse was transferred from the drawing rooms of the elite to the tharras in towns and villages — something the drawing room elite resents to this day.

Under Shaheed Bhutto’s leadership, massive transfer of resources towards the rural economy by setting higher prices for agricultural products improved farming. This process continues even today under the PPP’s stewardship. The credit for Pakistan’s nuclear capability also belongs to Shaheed Bhutto. The Karachi Nuclear Power Plant was started by Zulfikar Ali Bhutto at the end of 1972 when he was president but, prior to it, as minister for fuel, power and national resources, he played a key role in setting up the Pakistan Atomic Energy Commission. He also established the Kahuta facility.

Shaheed Bhutto was also a champion of human rights, especially the rights of women. His democratic regime had a very positive and liberal attitude towards women. For the first time in the history of Pakistan, all government services were opened to women, as were education opportunities at all levels. Most people do not realise this, but the huge Pakistani diaspora today is also a result of Shaheed Bhutto’s decision to recognise the right of all Pakistanis to a passport.

Shaheed Bhutto had the courage of his conviction to risk his life rather than compromise or seek the appeasement of a dictator.